Don’t ask me to define it; it’s a term used by someone else whose quilting I’ve admired for a long time now and I finally set out to grab a marking pen (gasp!) draw some lines and go for it!  I think of it as a kind of wild quilting with constraints but you can think of it any way you like 🙂  I used this process on the light blue side of the quilt and as I wanted to leave the narrow strips on the right side un-quilted, the resulting rows were obviously calling for various border designs.

Some people mark the whole quilt top at once and draw in every detail they want to stitch before they start.

But we all know that’s not me.  Let’s face it: that seems like it would take far too long and limit my spontaneous and organic quilting process (read as “making design decisions on the fly”…)

For this first one, I decided to start with marking off just a section or two, fill them in, and then choose what and where to mark next, just using lines to define areas, knowing that I might or might not respect them, and then worked from one section to the other incorporating the free motion stitching patterns I wanted to use.  Those adaptations are evident where you see swirls crossing lines that were drawn, which is exactly what I intended to do, but the lines had to be there first so I could know how I wanted to break through them to create the illusions, depth, and flow in the design. I didn’t mark in any of the fine details – just the straight lines bordering the larger sections, the diagonal lines to section off the diamonds, some of the radiating lines in a square or two to make sure they stayed even, and the partial circle outlines – and found that it really wasn’t necessary to worry about details anyway, because as long as specific lines were in place, the rest was just like wild quilting 🙂 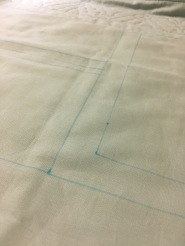 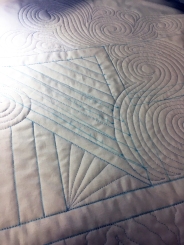 I was nervous to draw lines on my quilt top because even though the pen promised to disappear with water, I was worried that perhaps MY pen would not (black cloud syndrome…)  I had seen it demonstrated online, live, and the water spray really did remove the marks, but I still did a test piece first to make sure.  When everything was finished, and I had sprayed the whole quilt top, I let it air dry before putting it through the washer and dryer.  Even then I was nervous to take it out and see if something had randomly re-appeared with the combination of detergent and heat.  But it came out just fine 🙂 Yay!

I’m so happy with the visual effect achieved through this compositional quilting process, and now I’m very excited to do more of these!  I absolutely love how that swirl chain winds up and around from bottom to top (you must know by now that I find it most difficult to complete an intricate quilt WITHOUT swirls!!!)