I’ve been a spray baste fan since day one.  DAY 1.  I firmly believe that if it hadn’t been for spray basting, I wouldn’t have fallen head first into this quilting thing.  The idea of spending all that time pin basting a quilt was just too daunting.

But I’ve been thinking the whole thing through of late, and wondering if I should look at alternatives for my own good; I live in a northern climate so spraying outside isn’t really do-able for about six months of the year and I’m an all year round quilter :-).  I’ve been considering wearing a mask, but once that occurred to me, I realized that just because I’m not breathing it in directly while I’m spraying, it’s still lingering in my house. I haven’t had any respiratory problems thus far, but there’s no way to know what it will eventually do, and with an average of five to six quilts a month, even with proper ventilation for the fumes, there’s a lot of spray settling in places I don’t know about!

I also have a dry eye problem and I’ve noticed that my eyes bother me far more in the room where I generally baste quilts, so I don’t know if it’s connected, or if it’s just that I usually go to sit in that particular room at the end of my day when I’ve been straining my eyes a lot already, but it’s something to consider.

I know my posts don’t usually have a serious tone, so I don’t want to sound like I’m condemning spray baste or anything.  It’s so very handy and saves a lot of time, and I’m not swearing off the stuff here, but I am more open to pin basting now, so I thought I’d share with you a cool little helper I have found: Pinmoors.

I know that safety pins are popular, especially the curved ones, but I honestly find them kind of a pain for a couple of reasons:  they don’t show up well on prints and they can be finicky to remove when I’m in the middle of machine quilting with gloves on. 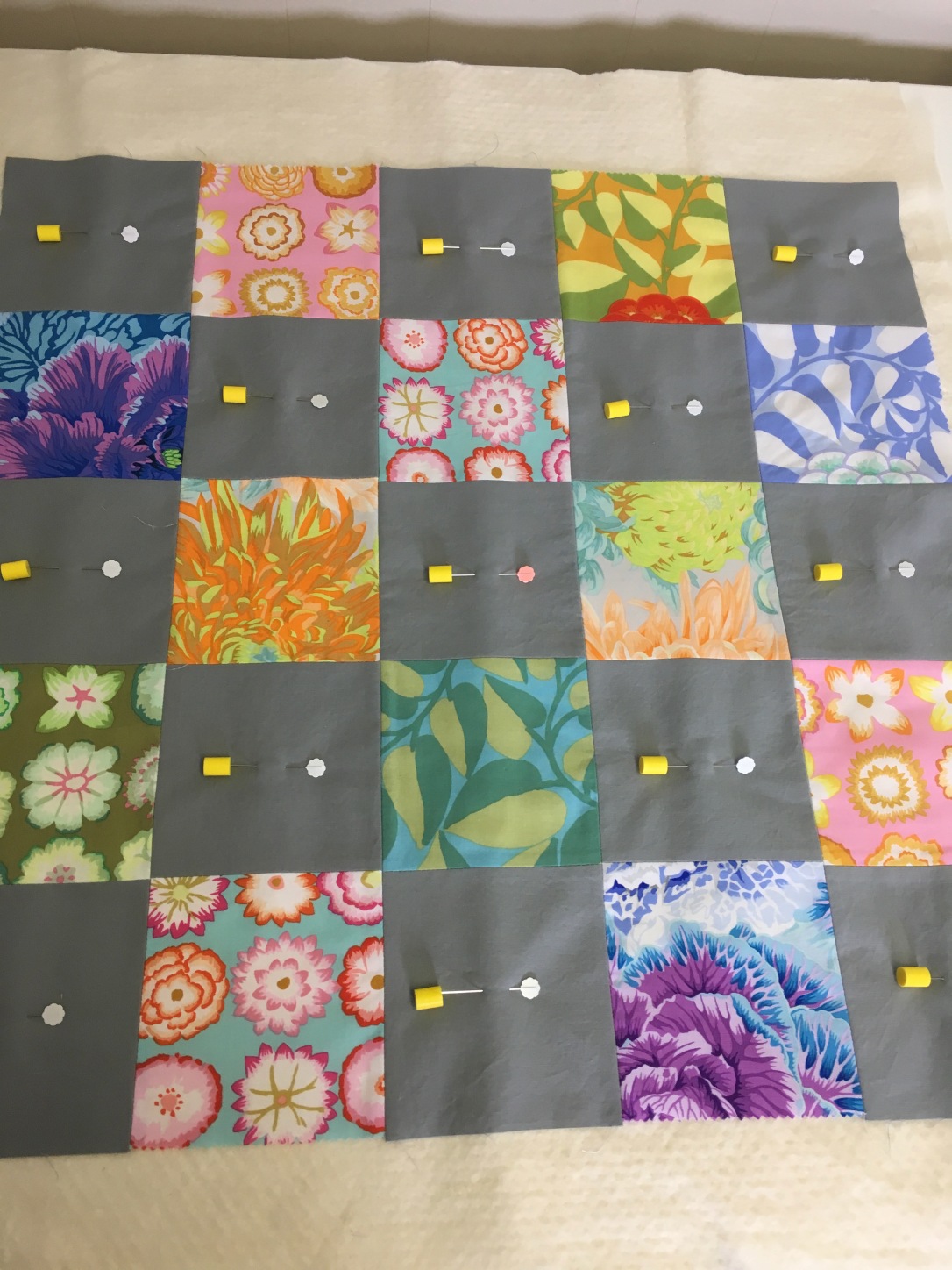 I already like my Clover flowerhead pins, and these neat little cylinders stick onto the ends to protect me from getting poked or scratched, but also making it very easy to pull out or reposition the pins as I go (and these pins are flexible enough to bend a little if you really want something with a bit of a curve to it while you’re pinning).  They’re self-healing so no matter how much you use them, they still hold on well.  The fact that they come in several bright colours – just like the pins – means that they show up really well on any fabric so I’m not going to miss one and stitch right over it!

You can buy them in a few places; I got mine through Amazon.  I’ve been using them on smaller projects, so my next test will be on a baby quilt and from there, hopefully, I’ll take them all the way up to the big ones 🙂