I haven’t been writing but I have been quilting!  I had a few projects to finish up for a Christmas market I’m going to, so thought I’d just get them done and then put them all together into one post.

I don’t generally like to go from market to market, but I do try to participate annually in the Christmas craft sale put on by our local Kinette club.  I’ve been a vendor for many years with various different items for sale depending on which craft stage I was in at the time! LOL  Now it’s all about the quilts for me, or at least quilting in general, as I do have a few smaller quilted items as well.

The first is a baby quilt made using Colorworks panels. I could have just let you think I actually pieced all those little fabric bits together to come up with the fantastic geometric designs but why hedge?  You know me well enough by now to figure out for yourself that there’s just no way that is happening!  I don’t even generally like working with panels – and yes, these did give me some grief because the things are just never printed straight on grain – but I managed to disguise any blatant issues and the result is a happy bright quilt so I’m satisfied. 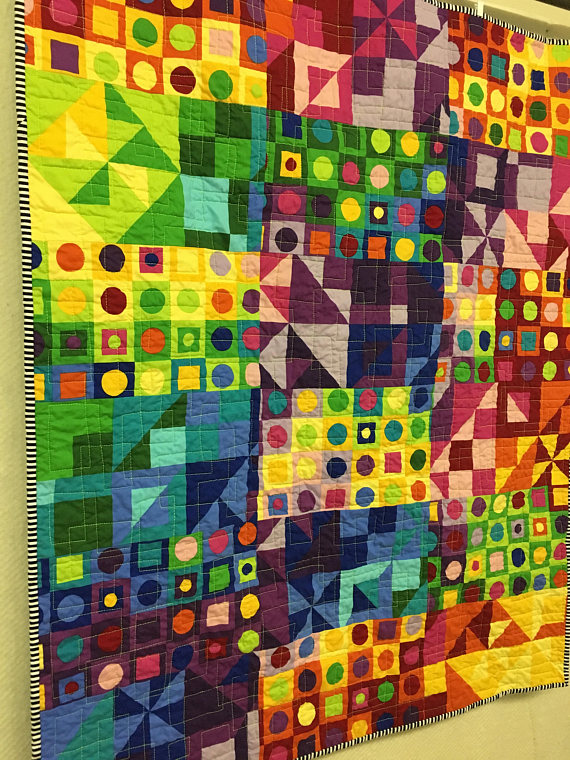 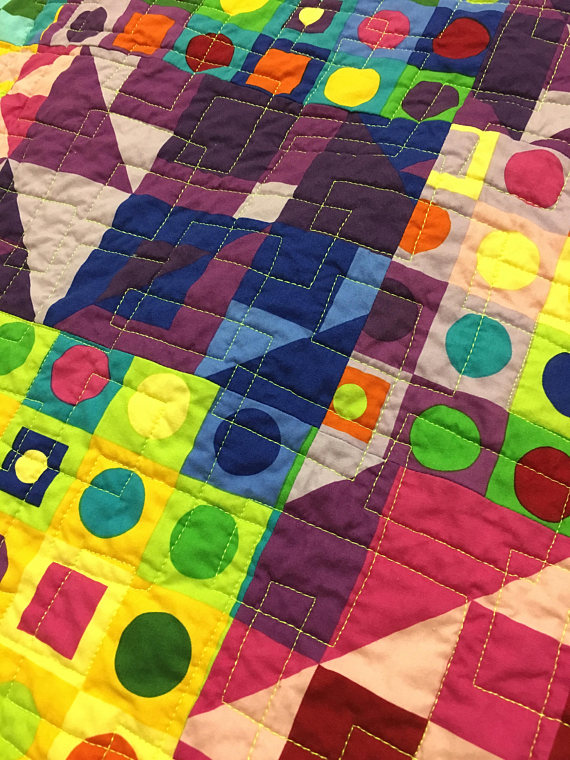 There are literally just seven seams in this quilt top. SEVEN.  I cut each panel into three wide strips, alternated the panel pieces and sewed them together horizontally (five seams), then cut the top vertically into three equal strips, flipped the middle section upside down and sewed it all back together (two seams).  Voila!  Enter some geometric stitching in a bright green shiny thread along with my favorite black and white striped binding and there’s a quilt that will give any baby lots to look at 🙂

The second is a lap quilt I made using another couple of Colorworks panels which I cut into narrow strips that are actually – believe it or not – pieced into the bigger black blocks.  It seemed like a good idea when I started and it isn’t hard to do, but the work of squaring up blocks after you’ve slashed them up a couple of times (or more for lots of you out there!) is just a pain in the neck for me.  It’s like being punished just for trying to add some angled pizazz to an otherwise plain old block.  Note to self … 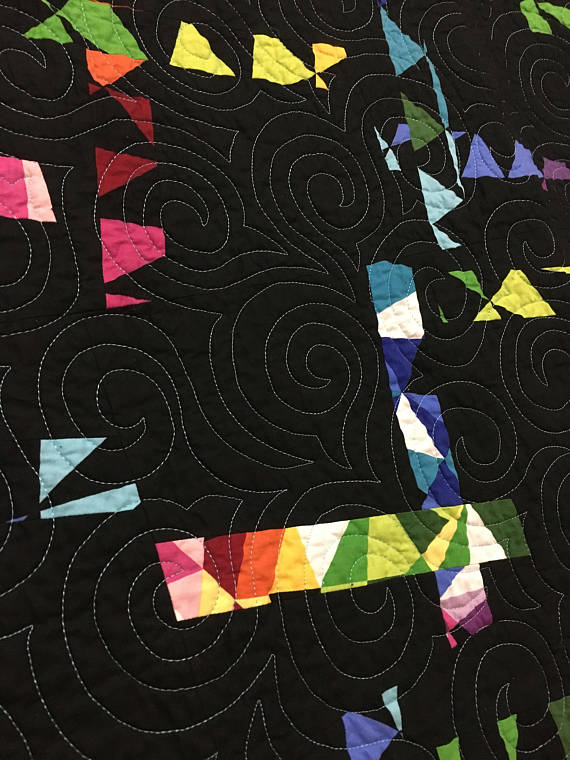 I used a large spiral stitching pattern in bright turquoise thread (not sure why it looks white here, but trust me, it’s turquoise, Magnifico #2138 to be exact!) on this one to contrast the stark black and the straight line piecing.  If you remember the post about deciding what and how much to quilt on a particular project, you’ll also remember that the quilting is almost always the most important focal point for me; it’s an additional artistic layer on top of everything else, so for a quilt like this, I wasn’t going for either a thread or a design that blended in 🙂

The last one was inspired by some photos I saw of this layout and I thought it was a really cute idea for a baby quilt, or even a lap quilt for a teenager or adult.  I figured out my own dimensions for the pieces according to how I wanted it to look, and it went together fairly quickly.  It’s just two colors and some simple piecing but because of the boldness of the design and the great mottled look of the background fabric – almost like football leather – I think it has some real character! 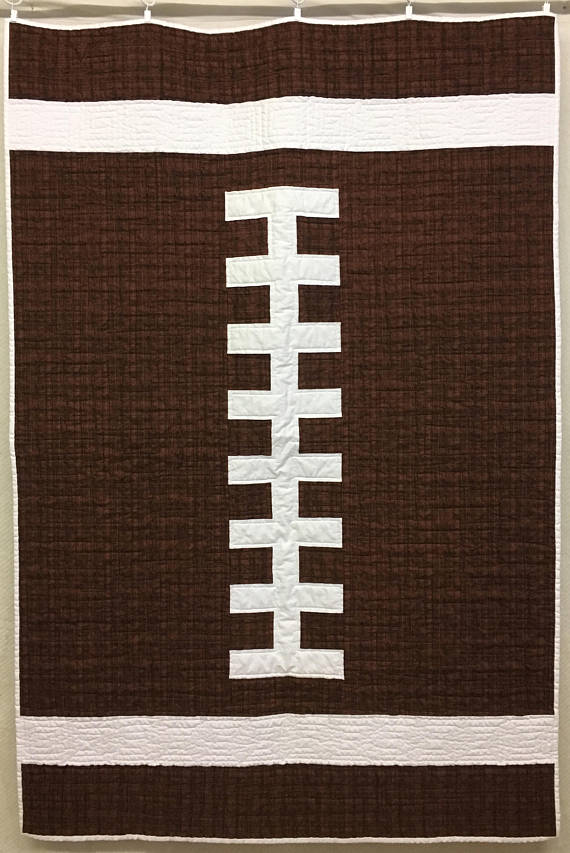 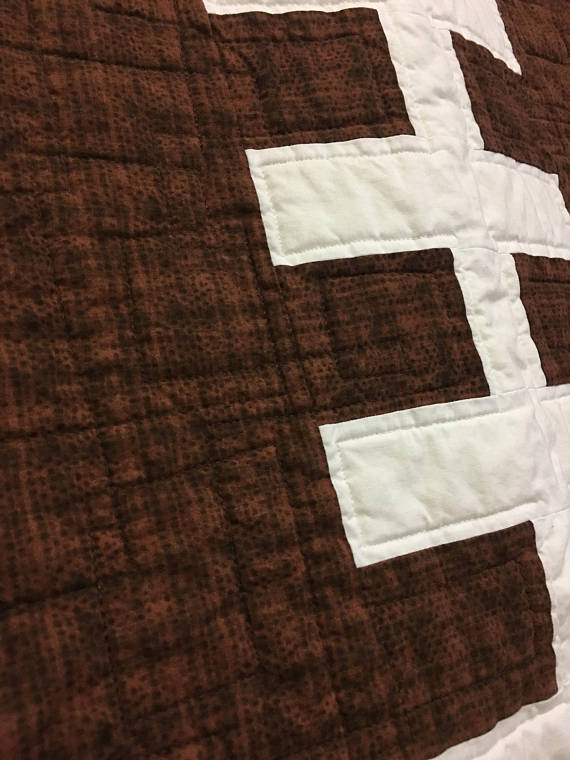 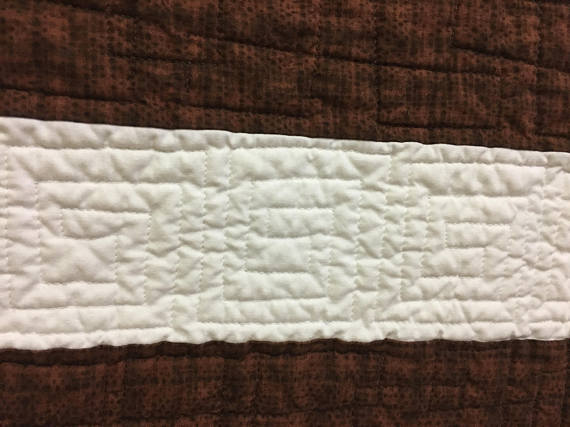 I used the handy geometric stitching pattern for the background, some basic seam echo stitching in the middle white sections and a square spiral border top and bottom.  I don’t often choose to make a novelty quilt but this was fun to make and I hope it finds a home under someone’s Christmas tree, because I’m definitely not a football fan myself! haha