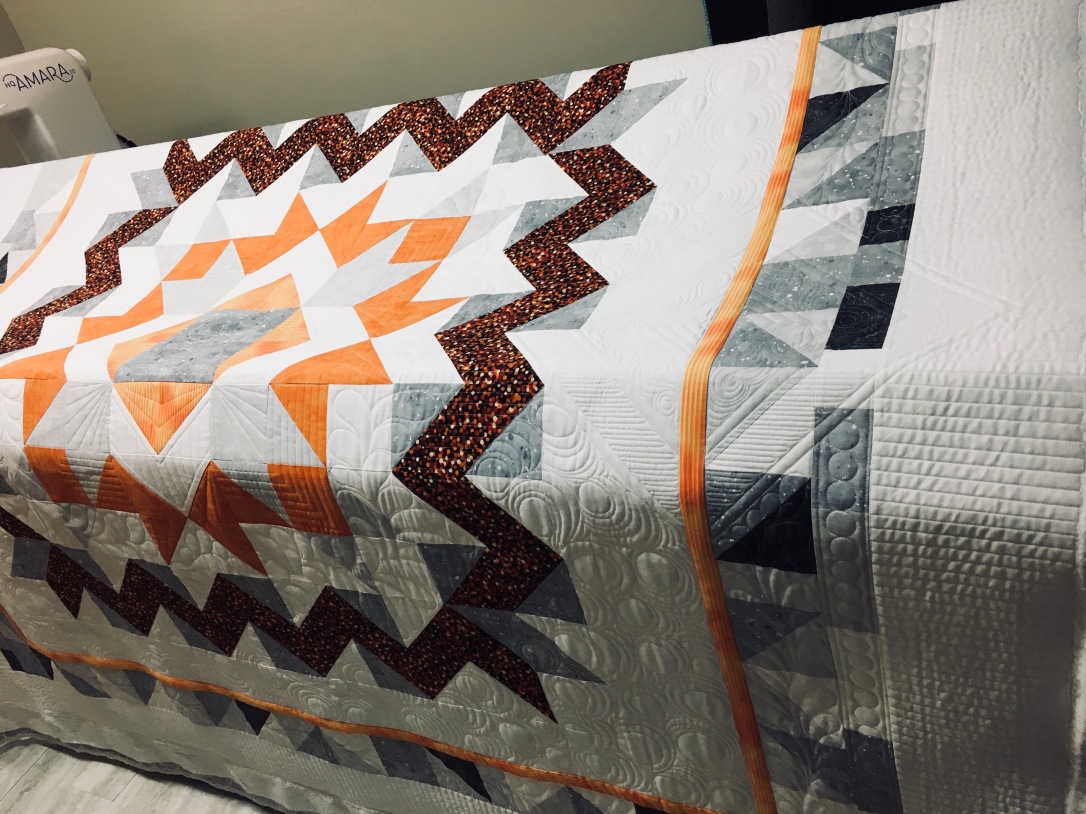 There’s always more to learn, more motifs to try, more fillers to practice.  The lists are endless.  So I have no shortage of available ideas, especially with access to the internet.

But I recently began to feel that I needed something else.  I’m not saying “something more” because I have access to “MORE”!  Something “ELSE” is different.

I wanted to start seeing spaces differently, to learn to look past the obvious and venture into new territory.  To “unlock my brain” so to speak, in the words of a quilt artist I recently spent a very productive and inspiring private training day with, Sharon Blackmore of Love Shack Quilts.  That was our goal: unlock my brain and take my quilting to the next level.

It’s not my nature to think outside the box; I can be lead there, but it doesn’t come naturally to me.  Thus the need to “unlock” my brain!  I can plan on the fly over a wide open space, and work within the confines of blocks to accent piecing, but I knew there was more to be done somewhere in between those two.

I had loaded this client quilt (pieced by Pam Fritsche) mid-week with a definite plan for a few of the areas, basted the whole quilt so I could roll it back and forth, and started stitching the designs that were clear in my mind.  I used some of my go-tos for the centre triangles, lots of straight lines for the modern look, I knew I needed to leave space for the initials requested, and I had the big feather border stitched out before I left it.

After my lesson day, I came home to the quilt, thinking I would just finish this one up and then start using my new vision on the next one! haha But when I started stitching the second large area around the star with the big echoed circles I felt myself getting bored (that doesn’t usually happen!).  I hit the centre of the bottom edge and immediately experienced a shift when I saw the space.

I wanted a big change that would make a statement right there and decided I could easily build a triangle and fill it.  That was the start – yes I’ve done something like this before in wide open space, but not in the middle of a border as a contrasting element.  I stitched it out, finished off the big circles and advanced the quilt.

I was planning to stitch a piano key border in the outside white space, but those darn grey half square triangle were mocking me.  I stared at them for a bit, trying to come up with designs to fill them in some ordered kind of way – typical! – but it suddenly hit me that I could ignore all of them and that bright orange sashing, and make my triangle a square!

This might not seem like a light bulb moment to everyone, but for me it was a breakthrough because I was seeing the space differently than usual, ignoring what was already there and making something new right on top of it.  I was playing outside the lines!  (and the angels sang… LOL)

From there, of course, I needed to up the anti in the rest of the final area too.

The whole time I was enjoying my new inspiration I was wishing I could go back in and change the first areas I had stitched because they would have been different at that point, but the end result was still pretty cool and I’m looking forward to my next detailed project so I can put to use more of what I learned 🙂

When I take a quilt off the frame I like to get a really good look at all the texture from various angles.  And that white on white gets me every time! 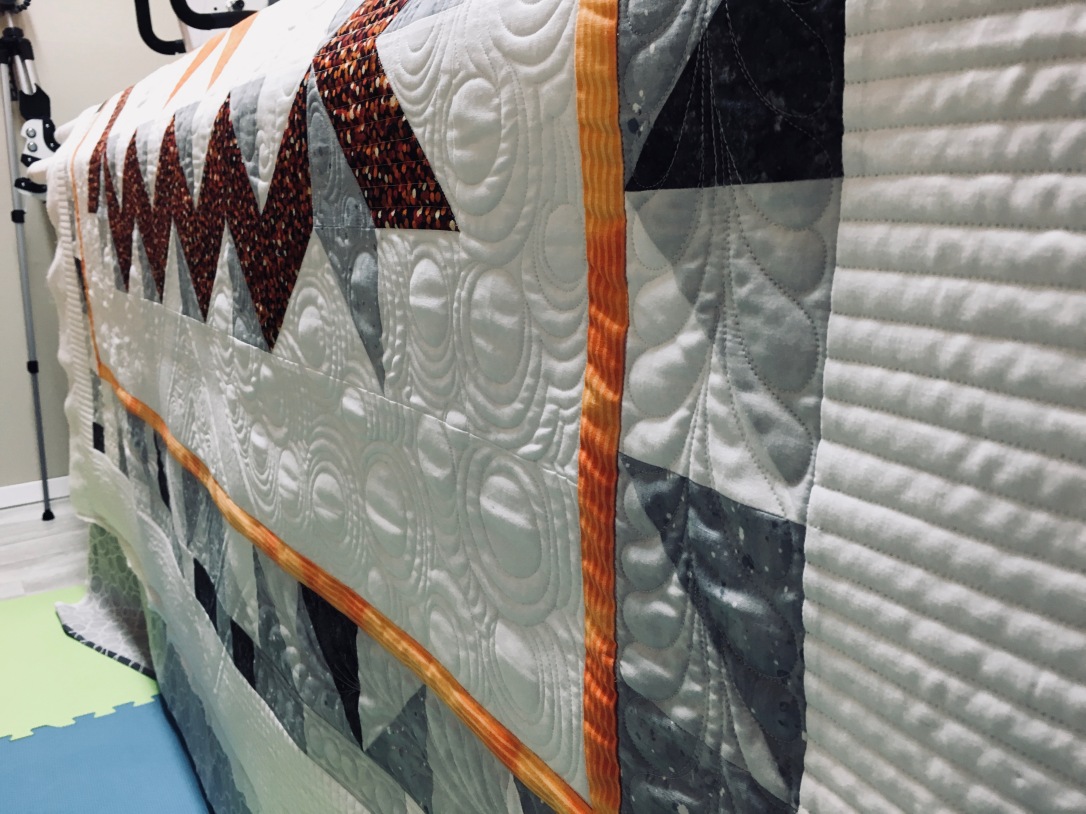 I love that square and I love how it draws all the attention to itself. 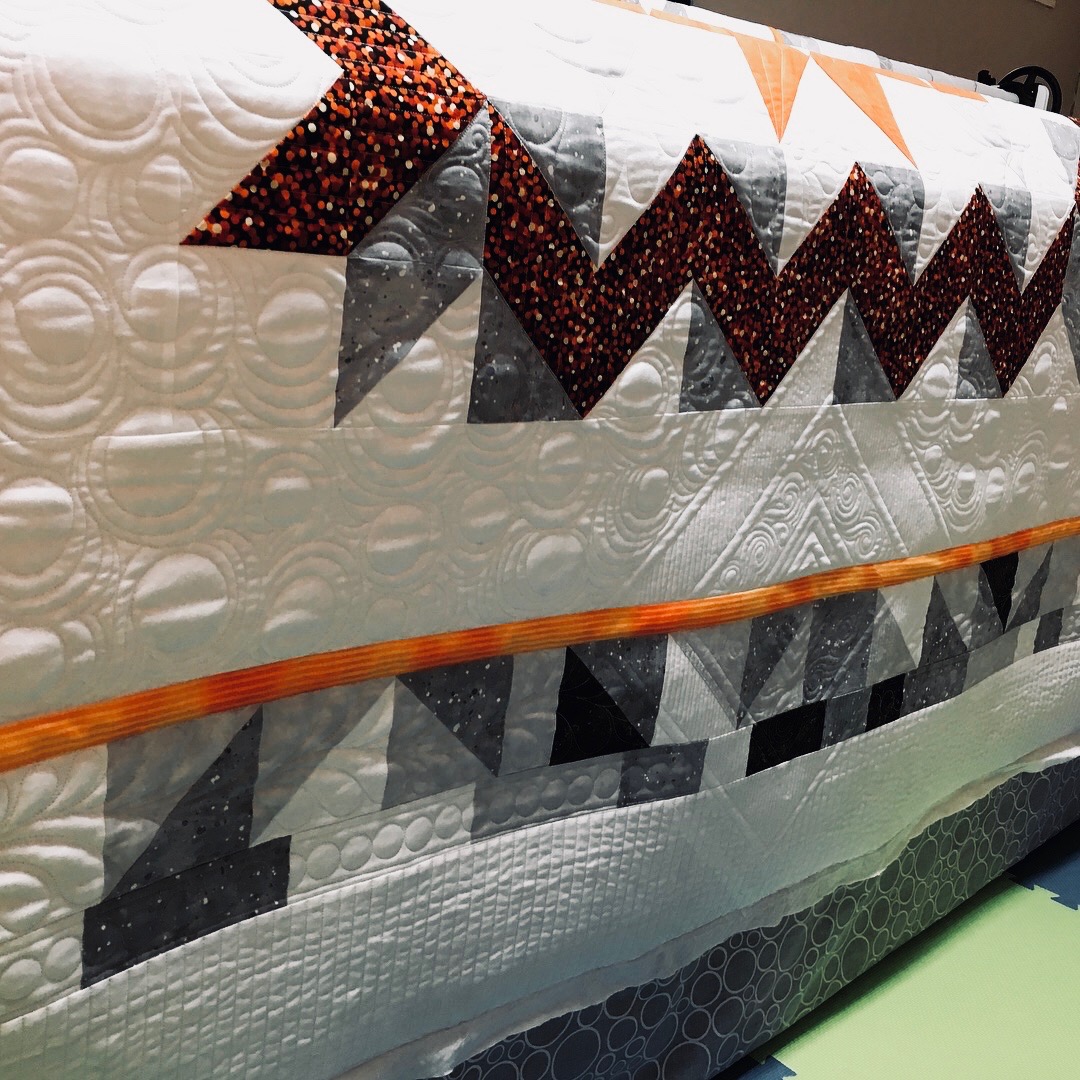 Do you play outside the lines? 🙂

1 thought on “Playing Outside the Lines”